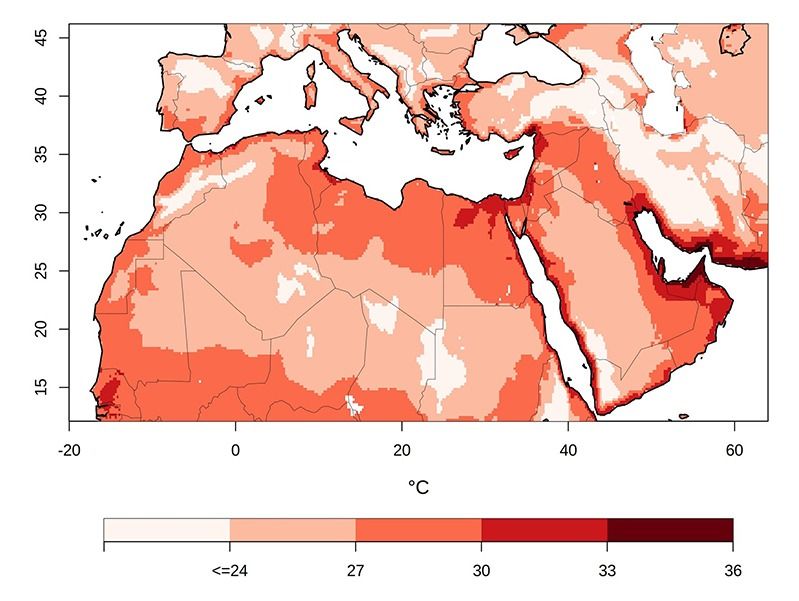 The CELSIUS research project “Climate projections of extreme temperatures at a regional and urban scale” at the Climate and Atmosphere Research Center of The Cyprus Institute has been completed. The project was implemented in three and a half years (January 2019 – June 2022) within the RESTART Program 2016-2020 of the Research and Innovation Foundation co-financed by national and European funds. CELSIUS has produced new climate change projections for the Middle East/North Africa (MENA), including the Eastern Mediterranean and Cyprus, with improved spatial accuracy and a focus on temperature extremes and urban warming.

The WRF model was used as a regional climate model to downscale across the MENA region with 24 km spatial accuracy, for the recent past and for the 21st century, climate fields from the IPCC planetary-scale CIMP5 model under the intense RCP8 emissions scenario. WRF was also applied to further downscale these results to 16 km and 4 km spatial resolution in the eastern Mediterranean and Middle East (EMME). Thus, for the first time, projections of key climate parameters and especially those related to temperature extremes, for different levels of global warming (2, 3 and 4 degrees Celsius) were produced in such a high spatial resolution and in such an extensive geographical area. Maps and tables with the changes in climate indicators were prepared for MENA, EMME and Cyprus, as well as for urban areas in the region such as Nicosia, Limassol, Cairo, in order to take into account, to some extent, the urban heat island phenomenon. The calculations of the model results were also specified for the wet-bulb temperature (WBT), which depends on the dry-bulb air temperature (which is usually measured) and the humidity. When the WBT value exceeds 30°C, it indicates conditions of high thermal stress for the human body, while values above 35°C are not considered compatible with the human function. Model projections show that in a hypothetical 3°C global warming scenario, after mid-century, WBT may reach or even exceed 30°C on the Eastern Mediterranean coast (and Cyprus) while in the Persian Gulf region it may approach the deadly level of 35°C.

The main results of the project in the form of maps (and other information related to the project, such as a list of publications in international scientific journals) are available online: