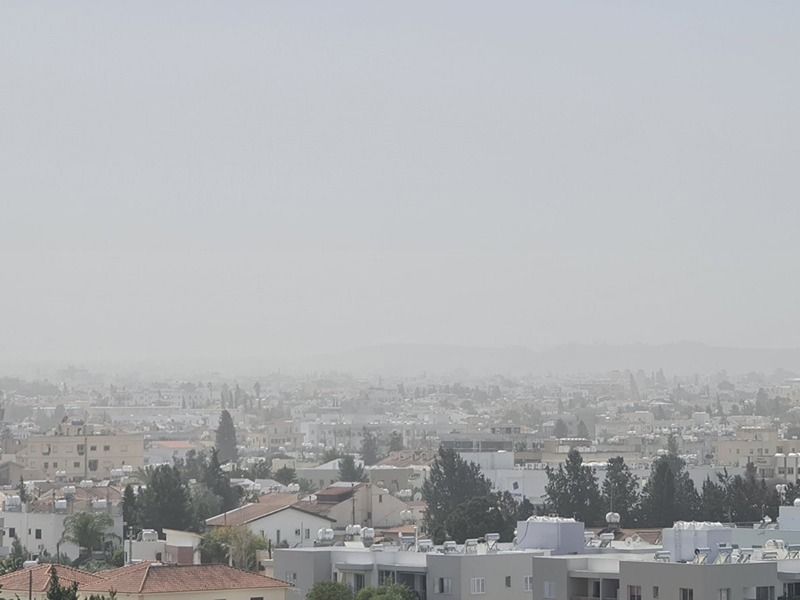 A couple of weeks back a dust event was noticed throughout the Mediterranean basin, from Spain to Greece. It reached Cyprus weakened, passing unnoticed. However, since Sunday a second event is taking place and we are not as lucky this time. The plume, which originates from the Saharan desert, has covered all of the eastern Mediterranean basin and is persisting over Cyprus for the third day in a row. Such events are common during springtime when the temperature gradient between the hot Sahara region and the relatively cold Mediterranean Sea is large enough to allow southern air masses to move northerly.

Sun photometric data recorded at the Nicosia station of the Cyprus Atmospheric Observatory (CAO) show that visibility is reduced to 16 km instead of the 38 km we typically experience. The particles that prevent us from enjoying the view of mountains and the Cypriot sky are a threat to our health as well. The PM10 concentration measured in Nicosia at CAO reached 400 μg/m3. It reached the highest concentration measured since CAO started operating in Nicosia a year and half back. PM2.5, which is more harmful to health because it can reach deeper into the lungs, reached 85 μg/m3. As a point of measure, the World Health Organization (WHO) suggests that the daily exposure to PM10 and PM2.5 should not exceed 45 and 15 μg/m3, respectively.

The dust layer is not found just at ground level. By taking advantage of a technology similar to the radar the police is using to monitor car speed on the road, we have noticed that currently the layer extends up to 4 km high and, according to a forecast by the University of Athens, we will have to endure it for the entire week. You can keep up with the ongoing of this dust event if you visit our webpage (link).

We should keep in mind that, even though dust episodes are hazardous for our health, they are beneficial for nature. Dust contains minerals that are necessary for the ocean, acting as a natural fertilizer. It is part of a natural process that without, ocean life would be poorer. However, we need to stay safe, and the best way is to just keep windows and doors closed, whether at home, in the office or in the car. This simple trick can prevent most of the hazardous dust to stay away, while the Mediterranean Sea is being fertilized to spawn new life.