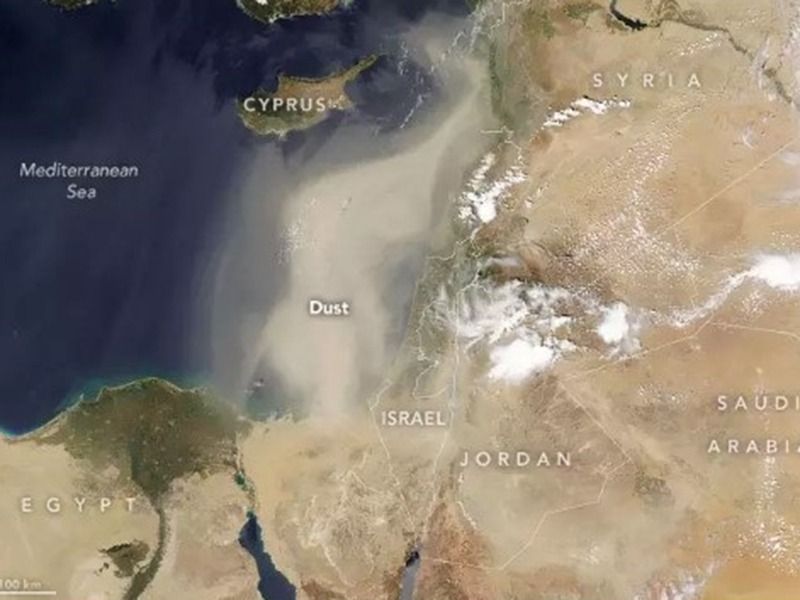 New study Shows that Severe Atmospheric Pollution in the Middle East, Detrimental to Health and the Climate, is Attributable to Human-made Sources

Dust over the Middle East on April 24, 2022, observed from a NASA satellite. The new study shows that, despite dust prevalence, high concentrations of microscopic particles from combustion sources in the Middle East are much more health-hazardous than the larger-size desert dust particles as the small ones penetrate deeply into the airways. Credits: NASA Aqua/MODIS

A new study published in the esteemed Nature Journal Communications Earth & Environment, has shown that in the Middle East, more than 90% of the fine aerosol particles detrimental to health and the climate originate from human-made sources. This contrasts with the common conception that desert dust is the most significant cause of air pollution from particulate matter in this region. Even though particulate air pollution is prevalent from several major deserts, the dust particles are relatively large, while high concentrations of microscopic particles from combustion sources are particularly health-hazardous as their small size allows them to penetrate deeply into the airways. The study also finds that the annual excess mortality from exposure to air pollution is similar to that of other leading health risk factors, like high cholesterol and tobacco smoking. This shows that in the Middle East anthropogenic air pollution is a leading health risk and an important climatic factor.

The publication reports on the results of the AQABA scientific expedition, which took place in 2017, during which an international team of researchers led by the Max Planck Institute for Chemistry in Mainz travelled around the Arabian Peninsula on a research vessel to conduct environmental measurements. The study was made possible through contributions of scientists from the Climate and Atmosphere Research Center (CARE-C) of The Cyprus Institute, as well as teams from Kuwait, Saudi Arabia, France and the USA. What makes the AQABA campaign particularly important is that there are relatively few measurements from the region around the Arabian Peninsula and in the Middle East in general. Researchers used the data gathered through the expedition to draw conclusions about general air quality in the region and its health consequences.

The recently published study reports on the ship-borne measurements gathered from around the Arabian Peninsula and verifies through elaborate modeling calculations that hazardous fine particulate matter in the region is to a large extent of anthropogenic origin (>90%). Additionally, findings indicate that the Suez Canal, the northern Red Sea and the Arabian Gulf stand out as regional ozone hotspots. The scientists found that concentrations of ozone, nitrogen oxides and fine particulate matter were significantly higher than the WHO guidelines.

Anthropogenic air pollution is a key factor in climate change in the Middle East, while extreme air pollution has been shown to result in an annual excess mortality rate of 745 people per 100,000, which is of similar significance to other leading health risk factors, such as high cholesterol and tobacco smoking. The anthropogenic particles are primarily caused by the production and use of fossil fuels such as oil and gas. They are generally smaller than desert dust and can penetrate deep into the lungs.

Until now, air quality in the Middle East was considered to be primarily affected by the vast amounts of natural dust. However, the AQABA observations and model results have revealed that this view is incorrect and that anthropogenic emissions are inherent and prominent. Therefore, the study concludes, since aerosols are a major driver of climate and health impacts in the Middle East, the anthropogenic component should be adequately represented in assessments of air quality and climate change.