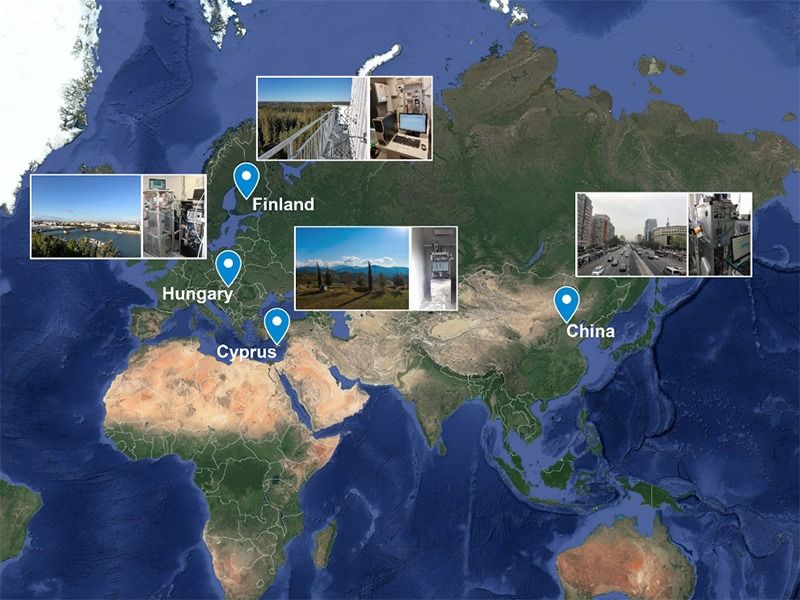 How does sulfuric acid form in the atmosphere? What are its sinks? How do the sources and sinks of this trace gas vary in different environments?

Sulfuric acid, once in the gas phase, has the capability of forming stable clusters which grow into aerosol particles especially when stabilized by atmospherically available bases such as amines and ammonia. Due to its low volatility and strong hydrogen bonding, sulfuric acid is found to be the major precursor of atmospheric new particle formation globally, contributing to both nucleation of particles and their early growth. Therefore, sulfuric acid plays an indirect role in climate cooling, worthy of studying in more detail.

Sulfuric acid in the atmosphere

The concentration of sulfuric acid in the atmosphere is a balance between its formation and loss mechanisms. During daytime, when solar radiation is available, sulfuric acid is formed through a series of reactions involving the oxidation of SO2, which is an abundant trace gas emitted from burning of fossil fuel. Alternatively, in dark hours, sulfuric acid is formed via reactions between SO2 and oxidation species known as Criegee intermediates. The atmospherically available acid concentrations can be lost to atmospheric preexisting particles through condensation or through forming clusters, the early stages of new particle formation.

Measurements of sulfuric acid in the atmosphere are scarce, attributed to its low concentrations (~106 molecules/cm3), which can only be measured using very expensive instrumentations. To overcome this challenge, atmospheric proxies are used to derive gaseous sulfuric acid concentrations from parameters that can be measured relatively easily. Earlier, commonly used, proxies for sulfuric acid were either derived from one environment or did not include all the above-mentioned formation and loss mechanisms.

This insufficiency in the currently used proxies, triggered a study initiated by a group of scientists from the Institute for Atmospheric and Earth System Research, The Cyprus Institute, Eötvös University and the Beijing University of Chemical Technology in Helsinki, Nicosia, Budapest and Beijing, respectively. State-of-the-art chemical ionization atmospheric pressure time of flight spectrometers were deployed in all four locations in order to generate a physically sound proxy for sulfuric acid, an alternative to its challenging and expensive measurement.

Measurements of sulfuric acid and its precursors were specifically conducted at:

The study showed that sulfuric acid concentration vary in these four environments depending on the interplay between its formation and loss mechanisms, which proceed at different reaction coefficients specific of the observation location. The results highlight that the loss of sulfuric acid at highly polluted environments, like Beijing, was underestimated using old proxies and that with the newly developed proxy, nighttime concentrations of sulfuric acid can be derived, which were not possible using older proxies.

This study is a nice example of the importance of collaborative work between individuals and institutions around the world. The publication has been produced within the framework of the EMME-CARE project, which has received funding from the European Union’s Horizon 2020 Research and Innovation Programme (under grant agreement no. 856612) and the Government of Cyprus.