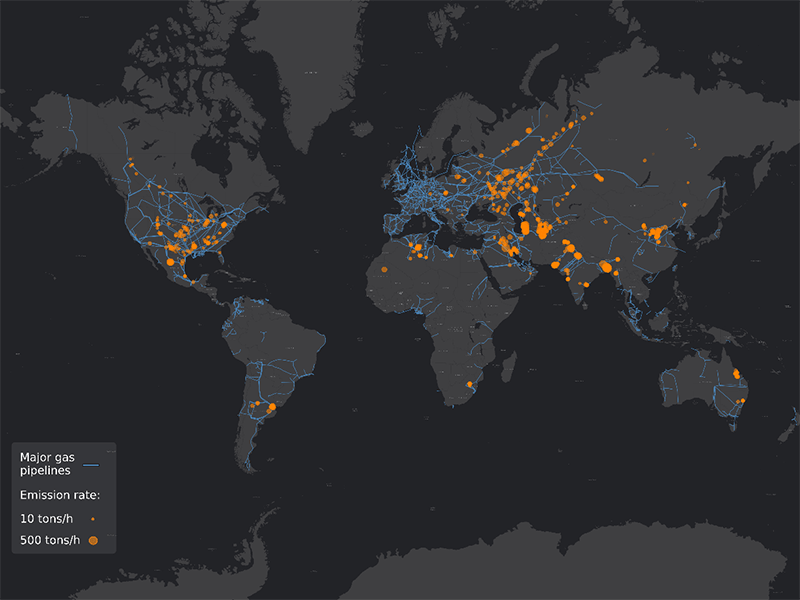 An international study involving CNRS and CEA researchers and the company Kayrros has uncovered hundreds of major methane releases linked to global oil and gas extraction activities. The team of scientists has shown that limiting volumes released would mitigate climate effects and save money—billions of dollars for the main fossil-fuel-producing countries. Their study is published in Science (4 February 2022).

A major contributor to climate change, methane (CH4) has a global warming potential approximately 30 times higher than that of CO2, over a 100-year period. One quarter of anthropogenic emissions of this greenhouse gas originate in worldwide extraction of coal, oil, and natural gas (of which methane is the main component). A study in 2018 already revealed that official US inventories greatly underestimated actual emissions from oil and gas extraction and distribution activities.1 The observed discrepancy is apparently due to undeclared sporadic releases of large quantities of methane by industry operators.

An international research team led by EMME-CARE Advanced Partner the Laboratoire des Sciences du Climat et de l’Environnement (CNRS / CEA / UVSQ), with the contribution of Professor Philippe Ciais, Research Director at LSCE and CARE-C Institute Professor, in cooperation with the firm Kayrros,2 have achieved a world first by completing a global tally of the largest emissions of methane into the atmosphere by the fossil-fuel industry. These may be accidental or the result of intentional venting associated with maintenance operations, which account for very large releases. To obtain their data, the researchers methodically analysed thousands of daily images generated by the ESA’s Sentinel-5P satellite over a two-year period. This allowed them to map 1,800 methane plumes around the globe, of which 1,200 were attributed to fossil-fuel extraction. They deem the impact of such releases on the climate comparable to that of 20 million vehicles on the road for one year.

These emissions account for 10% of the total estimate for the industry. Yet they are just the tip of the iceberg because the satellite is only able to routinely detect the biggest plumes (>25 tonnes per hour of CH4), which are also the most intermittent.3 The researchers demonstrate that these massive releases of methane are not randomly located but always appear over particular oil and gas extraction sites. As borne out by observations of these releases, whose volumes depend on maintenance protocols and diligence in the repair of leaks, the rules implemented by states and businesses play a major role.

But would preventing these emissions be so costly to oil and gas operators that they prefer to pursue their current practices? By taking into account the underlying social costs related to climate change and air quality, as well as the monetary value of gas wasted, the study actually shows that limiting them would yield billions of dollars in net savings for the countries in question. It emphasizes the need for a reliable atmospheric monitoring system to thoroughly track emissions and estimate the impact of local measures aimed at abatement.

2 This study also involved researchers from the Département d’Informatique de l’École Normale Supérieure (CNRS/ENS-PSL/Inria) in France; Duke University, the University of Arizona and NASA’s Jet Propulsion Laboratory (JPL-Caltech) in the US.

3 Smaller-scale methane emissions invisible to the Sentinel-5P have been observed over certain regions at a higher resolution—via airborne remote-sensing campaigns, for example.