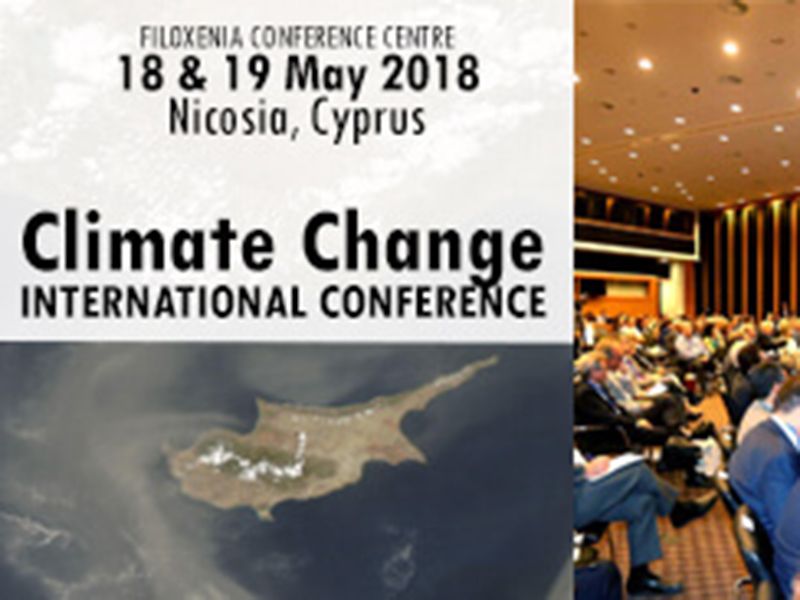 The Eastern Mediterranean and the Middle East (EMME) is a region populated by over 400 million people, and is one of the ancient cradles of civilization endowed with enormous cultural heritage, diversity and natural resources. Nowadays, the region is burdened with conflict and poverty, and the emerging threats of Climate Change find most of its societies and ecosystems extremely vulnerable and stressed. It is anticipated that the combination of Climate Change, poverty and conflict could cause additional hardship to the peoples of the area, exacerbating political instability and inducing migration at an unprecedented scale. The solutions needed to ameliorate Climate Change impacts in the region are to a degree known, and the scientific community is aware of the urgent need to collaborate towards providing a better understanding of the challenges and to subsequently propose appropriate policy options. In recognition of the above, the International Conference entitled “Climate Change in the Mediterranean and the Middle East: Challenges and Solutions ” was organized in Nicosia by the Cyprus Institute on 18th-19th May 2018; the program of the Conference is shown in the Appendix. The Conference was organized under the aegis of the President of the Republic of Cyprus, H.E. Mr. Nicos Anastasiades, with support from the Representation of the European Commission in Cyprus and was attended by over 320 participants from 35 countries. A key feature of the Conference was the engagement of world calibre policy makers, opinion leaders and renowned scientists in the debate concerning the climate challenges that the EMME region will face. Preconference workshops on the issues of climate and pollution monitoring, health and agriculture were held on May 16th and 17th. The Conference received extensive media coverage, both locally and internationally including reports from Associated Press (AP), which were carried in a number of international news sites, and Euronews coverage that included reports published on their website, and video coverage that aired internationally during the days of the conference.

The Conference set out to provide the scientific basis and policy considerations needed to introduce this important theme into the forefront of climate discussions and was conducted within the following context:

• The EMME region is consistently identified by global model studies as a region where Climate Change will manifest itself with particularly severe consequences for its inhabitants and infrastructures.
• Climate Change will cause extreme hardship on the peoples of the region, including their health and economic wellbeing, associated with heat extremes and water scarcity. The conjectured resulting instability and migration are likely to have profound international ramifications, especially in Europe.
• The EMME region is highly heterogeneous, and geopolitical reasons have prevented so far effective coordination, joint scientific activities and concerted regional policies to ameliorate the impending climate actions.

The principal goals of the Conference were:
a) To share, capture and catalogue the latest scientific modelling predictions of Climate Change for the region of interest, including temperature increase, changes in precipitation, intensity and frequency of extreme weather events, and regional impacts on health, agriculture, tourism and other sectors of the economy.
b) To review and discuss the existing and emerging technologies for mitigation and adaptation to Climate Change relevant to the region, including technologies in the areas of energy, desalination, water management, climatization, health and agriculture.
c) To present and debate mitigation and adaptation policies that are either planned or are already in place in the various countries of the region, and to explore synergies and joint ventures for scientific and policy coordination for adaptation to the changing environment.
d) To promote and structure an active dialogue among the scientific community and policy makers at a regional and international level.
Following two days of intense and very productive presentations and discussions, we summarize below the main conclusions and actions proposed in order to advance the goal of implementing coordinated, mitigation and adaptation solutions to Climate Change in the region.

Substantial scientific evidence supports the claim that our planet may be approaching a tipping point due to anthropogenic activities. It is therefore imperative that the 2015 Paris Agreement path for decarbonisation is followed, including immediate and deeper cuts in greenhouse gas emission to reduce the risk of global average temperature rising 2 oC above pre-industrial levels. The progress achieved towards this goal, gauged by the adherence to the process and the targets set in the Paris Agreement, was assessed as disappointing, as emerged in the account offered by the architect and chair of the Paris Agreement former Prime Minister of France Laurent Fabius.
The EMME region has warmed twice as fast as the global average during the past four decades, especially during summer, confirming its designation as climate “hot spot”. The significant rainfall decreases observed during the last decades in most parts of the region are projected to continue throughout the 21st Century, while extreme weather events will occur more often and increase in intensity. Located in the vicinity of the two largest deserts worldwide, the region suffers from frequent and intense desert dust storms that have steadily increased in the Middle East over the past 15 years, especially in, but not limited to, Syria and Iraq. Under the “business as usual scenario”, temperatures in the eastern parts of the EMME region, especially around the Gulf, are projected to exceed the threshold for human adaptability by the end of the century.
The negative effects of Climate Change on human health are multiple and include exacerbation of respiratory, cardiovascular and cerebrovascular diseases, together leading to millions of premature deaths every year. Urban areas, where heat stress combines with other environmental stresses, including the urban heat island effect, desert dust, air pollution and water scarcity, are particularly vulnerable. These impacts will be further exacerbated by an increase of bacterial and viral infections, including those transmitted by insect vectors.
The rising mean and extreme temperatures and water scarcity will threaten ecosystems and biodiversity, reduce agricultural output and increase food insecurity, which combined with poverty and geopolitical tensions, are expected to be among the principal causes of inducing conflict and migration.
Tourism constitutes a very important economic activity for most of the countries of the region. It is both a contributor to anthropogenic causes of Climate Change and a prime potential victim of it. As international travel is due primarily to tourism rather than business, and as the Mediterranean and the Middle East are principal European tourist destinations, the economies of the region will be severely affected. A better understanding is required of the Climate Change impact on the tourism industry and the adaptation strategies that need to be implemented, which will necessitate coordinated research.
The scarcity of reliable observational data in the region prevents a full assessment of the extent of air pollution due to Climate Change and limits the accuracy of model predictions.
Scientific research needs to be intensified and better coordinated at a regional scale; environmental monitoring needs to be expanded, intensified throughout the area and better integrated in world networks. This is particularly acute in non-EU countries in the region, including North Africa and Middle East countries, which are expected to suffer the most from irreversible environmental changes. Therefore, initiatives with a regional focus and emerging regional centres for Climate Change research and sustainability, can help refine the scientific basis for climate and environmental challenges in the region and activate science-policy interface and action.
Public awareness and engagement through education and targeted community outreach, including NGOs, industry and policy makers, are currently insufficient and must be enhanced and enabled, taking into account regional socio-economic specificities.

In addition to the general conclusions presented above, the following specific conclusions and recommendations were derived from focused discussions on themes of special concern, especially during the preconference workshops.
• The EMME region has warmed, on average, by about 1oC during the last four decades. Dynamical downscaling of the global-scale IPCC projections over the region reveals that, even under the “moderate” emissions scenario (RCP4.5), the region will already reach the 2.0o C target of the Paris Agreement by the middle of this century. Expanded activities to assess the impacts that these changes will bring about on particular economic sectors is urgently needed; better coordination is also needed in order to support multi-mode Climate Change vulnerability and adaptation assessments for the region.
• Insect vectors of disease are emerging or re-emerging in the region, and high resolution vector population and environmental modelling is needed to better understand and predict vector suitability and abundance and develop an early disease warning and decision support system.
• Urban centres will be particularly vulnerable to the combination of extreme heat, exacerbated by the urban heat island effect, and local and trans-boundary air pollution. New and advanced monitoring techniques, in conjunction with weather and air quality forecasting need to be deployed in order to alert stakeholders and the public, but also to help develop resiliency measures for adaptation and mitigation.
• An integrative systems approach is required that combines atmospheric, environmental and sea monitoring, earth system modelling and Climate Change impacts, adaptation and mitigation assessments for the region.
• Monitoring and understanding of the sea ecosystems in the area and how these will be impacted by Climate Change is a high priority, principally for areas in the Mediterranean Sea but also the Gulf and the Red Sea.
• Intense solar radiation and lack of precipitation during summertime contribute to high levels of photochemical pollutants (e.g. ozone, fine particulates) in the region.
• Desert dust from the Saharan and Arabian deserts is identified as a key component of the air quality and climate system in the region, playing a critical role in earth radiative balance, cloud formation, air pollution, atmospheric abundance of bacteria, and marine ecosystems.
• Important concepts and methods for long-term observations of the ocean-landecosystem-atmosphere continuum must be implemented, possibly through international initiatives that can interconnect national centres to enhance monitoring capacity and catalyse scientific collaboration in the EMME region.

• Regional problems call for regional measures and solutions; a stronger collaboration at a regional level is a necessity. At the scientific and technological level, engagement within the EMME must be enhanced. Coordination and exchange of knowhow concerning adaptation measures among EMME countries are necessary, both at a policy level and towards development of transnational solutions.
• The regional coordination needs to be embedded into international efforts and relevant activities of international organizations (e.g. World Meteorological Organization, World Health Organization, Food and Agriculture Organization, World Bank etc.) and networks (e.g. “Future Earth”, “Sustainable Development Solutions Network”, etc.). New opportunities may arise, as is the case of engaging the monitoring network of The Comprehensive Treaty Ban Organization. The importance of the engagement of the European Union at all levels was highlighted and uniformly judged as of critical importance.
• A “Cyprus Process” was proposed and articulated by Prof. Jeffrey Sachs for a Common Mediterranean Pathway to Climate Change, whereby Mediterranean and Middle Eastern research units and think tanks produce a report on Mediterranean Climate Change, Energy Solutions and Common Economic Approaches, to be approved in Mediterranean Ministerial and Heads of Governments meetings and presented to the UN Summit on Climate.
• National and regional plans for raising public awareness and engagement through actions at all levels must be developed, including structured climate education and outreach targeted to various communities, municipalities, NGOs, policy makers etc.
• Follow-up meetings and conferences like this as well as specific thematic workshops to address specific topics must be planned. In this context, the idea was presented to institute this conference as the first in a series of biennial conferences, interspersed with thematic workshops/events.
• At the Cyprus level, the Cyprus Institute announced the forthcoming launch of a Cyprus SDSN Chapter, with the aim of coordinating with other local networks around the Mediterranean and to help drive the “Cyprus Process” forward.