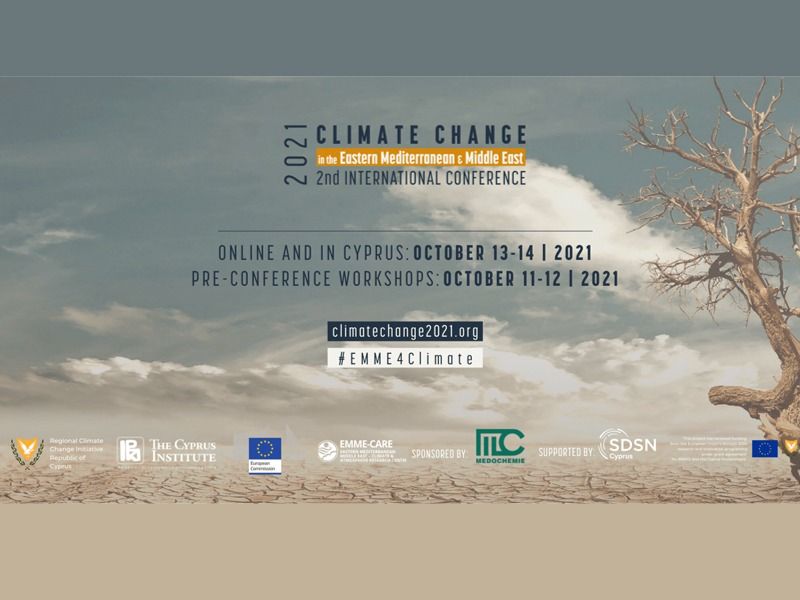 The leading role of Cyprus for tackling the Climate Crisis was highlighted at the 2nd International Conference on “Climate Change in the Eastern Mediterranean and the Middle East” (EMME region), which successfully took place on 13-14 October 2021, within the framework of the Cyprus Government Initiative for Coordinating Climate Change Actions in the Eastern Mediterranean and Middle East.

EMME-CARE co-organized the Conference, alongside the Cyprus Institute, the Eastern Mediterranean and Middle East Climate Change Initiative of the Cyprus Government, and the European Commission Representation in Cyprus.

The Conference, which was held both with physical presence and online, was attended by leading environmental scientists, as well as officials from Cyprus, Greece, EU and Middle East countries. During the event, prominent policymakers and scientists from all over the world reviewed the manifestations of the climate crisis in the EMME region, and discussed the priorities and the main elements of a Strategic Plan for Climate Change mitigation and adaptation.

Basis for the discussion was provided by the results that emerged from the first phase of the Initiative, a set of comprehensive scientific and techno-economic studies leading to policy recommendations for consideration by the Governments of the region. Over the last two years, the studies were developed from contributions of more than 220 experts, primarily from the EMME region, and organized into 13 scientific Task Forces coordinated by The Cyprus Institute.

The Task Forces produced a “Policy Framework and Measures for the Climate Crisis in the Eastern Mediterranean and the Middle East region”, which consists of six mutually supported pillars:

This Action Plan is expected to be finalized with a Ministerial meeting next February, and ratified by a meeting of country leaders in the autumn of 2022. The detailed conclusions and findings of the Conference will be presented at the Glasgow Climate Summit in November.

In his address, the President of the Republic of Cyprus stated that this is an important Initiative by the Government, scientifically coordinated by The Cyprus Institute, as our region is classified as a global “climate change hot-spot”, being particularly vulnerable to its negative impacts, and our countries are already witnessing serious challenges.

“If we fail to act, the impact on public health, ecosystems, agriculture, tourism and water resources will be unprecedented. Hence, if we do not mitigate the effects of Climate Change the pressure on our governments will increase dramatically, as our citizens will rightfully demand better health and living conditions, improved air quality and a clean environment”. Task Forces’ findings, along with the policy recommendations they provide, will be invaluable tools for the work of the national contact points of each country during the development of the Regional Action Plan”, he noted.

He also added that further to the Government’s efforts to promote collaboration on addressing Climate Change at a regional level, at the national level they are determined to take all necessary measures so as to achieve the Paris Agreement goals and the ambitious targets set by the EU.

“Indicatively, more than 500 million euro – that is 41% of the budget of our National Resilience and Recovery Plan for the years 2021 to 2026 – which aims at strengthening the country’s potential for economically, socially and environmentally sustainable long-term growth and welfare, is devoted to investments and reforms that contribute to climate neutrality and towards green transition.  We are compelled to take on urgent action to address climate change and I am certain that you will agree with me that the time to act is upon us. Our vision is for our region to look to the future with optimism and to use the climate challenge as an opportunity to proudly demonstrate what our countries can achieve when they join forces by cooperating and acting together”, he stated.

In his greeting, the Former Prime Minister of France, and President of the French Constitutional Council, Laurent Fabius, stressed that the scientists have the scientific solutions to improve the current situation. He pointed out that if we rely on science, then it is not too late. In fact, he noted, it is the cooperation of the scientific community, political establishment and civil society that brought about the Paris Agreement. Laurent Fabius also said that national and global cooperation is essential, as cooperation is the key to achieving our goals.

The Prince of Jordan pointed out that the cooperation of the states of the region and not only, with the help of science will be the key to establishing a joint strategic Action Plan to address the consequences of Climate Change.

The European Commissioner for the Environment, Oceans and Fisheries, Virginijus Sinkevičius, was particularly outspoken, commenting that Climate Change has become a huge challenge that threatens humanity. “Although we are facing this threat,” he said, “the planet can still take timely measures to deal effectively with the Climate Crisis.”

Finally, Prof. Costas N. Papanicolas stated that the EMME Climate Change Initiative launched by the Cyprus Government is meant to do just that: get all countries of the region to cooperate in combatting the evolving Climate Crisis. This conference will provide a forum where key findings and recommendations of the scientific techno-economic phase will be presented and debated. This “dialogue” between the scientific community and policy makers, marks the transition to the implementation phase of the Initiative. It’s a critical step on the road towards developing an effective Action Plan.

For more info about the Conference here.