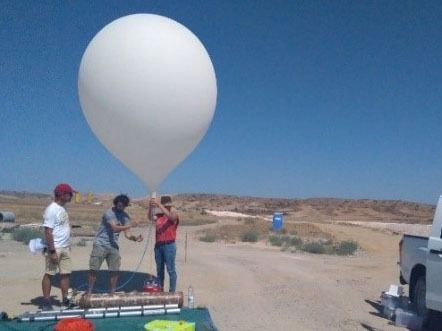 The geographical position of Cyprus is advantageous for measuring regional and long-range transported pollution from natural and anthropogenic sources of air masses from the neighbouring continents, i.e. Europe, Asia and Africa cross over Cyprus. AirCore is an innovative atmospheric sampling technique, specifically designed for acquiring vertical profiles of greenhouse gases concentrations by sampling air from the stratosphere down to the surface. The data received by AirCore are having a valuable contribution not only for the atmospheric inverse models, but also for the calibration of the Total Carbon Column Observing Network (TCCON) and the validation of space-based instruments, like OCO-2/3, SP5/TROPOMI and GOSAT.

On 28 July 2022, an AirCore flight was pursued under Prof. Jean Sciare’s encouragement by teams of the Climate and Atmosphere Research Center (CARE-C). Specifically, the teams of CAO and USRL, worked together for the successful implementation of this AirCore flight. Such flights are taking place in Cyprus since 2020 in collaboration with LSCE and the French AirCore program.

A helium filled weather balloon carrying the AirCore, was released from Tseri area in Nicosia, reached 29 km altitude and after the balloon is released, the AirCore landed with a parachute at South of Klirou dam in Nicosia. The whole flight lasted about 2.5 hours and it was monitored with a radio-sounding system and several GPS trackers. After the recovery, the analysis of the sample took place promptly at the Cyprus Institute’s facilities, using a gas analyser by PICARRO.  The meta-analysis for the calculation of the CO2, CH4 and CO vertical profiles, will be finalized at LSCE, in France.